Does He Needs Space Or Is It All Over? This particular question can be very troublesome for you; chances are you are thinking about this 24/7.

This specific question is tough to answer. Men are complex beings. Often, they give away mixed signals. Those mixed signals can confuse you a lot. Confrontation can be tricky, as well.

So, the only way to judge his feelings for you is to look for signs. 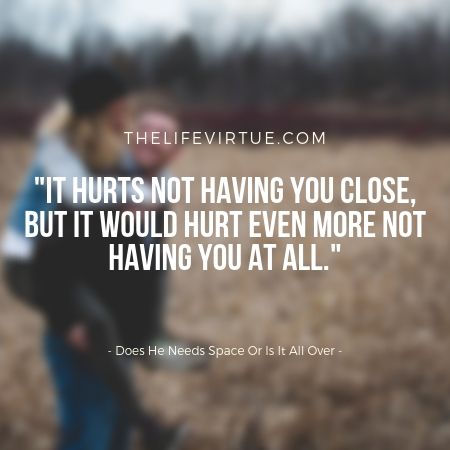 Does He Need Space or Is It Over? – 4 Signs to Decide!

As we have talked about some of the reasons why men need space, now let us explore when it means it’s all over.

1. He is ghosting you

If your man is deliberately avoiding contact, then it means he is ghosting you. This behavior could say that he is considering a breakup and do not want to explain to you anything. He leaves you wondering and doesn’t respect you enough. Chances are, he is keeping his options open by not formally breaking up with you instead of playing childish games like ghosting.

Do not act needy. Do not blow your boyfriends’ phone with messages and calls. This will demean you. Try to maintain your composure and know that no mature guy will ever do this. Let him go!

If he was acting fishy for quite some time, it might mean he is cheating on you. Suspicious activities, hiding his whereabouts, and long periods of no contact are hints that he is involved somewhere else.

Don’t let your rage control you. Be careful about the way you react. In most cases, cheaters don’t admit, and chances are you will not find substantial evidence to show that in their faces. Maintain your dignity. 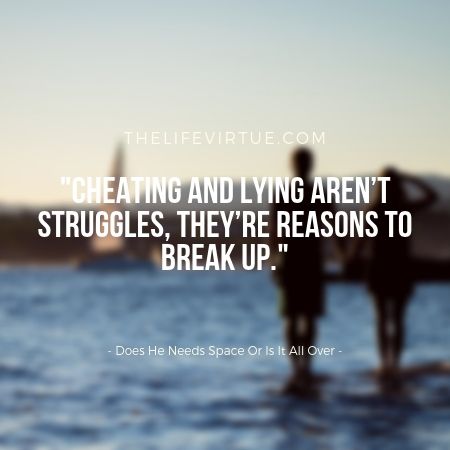 3. He started making plans without you

If usually you were a part of his plans and suddenly you are cut off from them, it means that he is pulling away now. He can be doing this on purpose. These plans might include shifting from one place to another, going abroad, etc.

Talk to him for the clarity of your mind. He might be waiting for you to initiate the conversation so that the matter can be finished once and for all.

The constant argument is a sign of conflicted feelings. He can feel frustrated with you and purposely picking fights to create his space. This particular sign can be tricky because 1) he might want space 2) He is trying to justify that things are no longer going to work between you.

Recognize what he wants. Remain calm. Have a productive conversation with him.

6 Reasons Why Men Crave Space in Any Relationship

We all know how sudden change in behavior hurts. It not only makes you worry but also makes you think, “What does this mean for a relationship”? Below are some significant reasons why men act distant out of the blue.

When guys are stressed, they need their time alone. They put up a wall, and many times, they don’t even realize that. The reason might be that he doesn’t want to upset you by involving you. Unless you are particular about the reason for his stress, you cannot judge what is bothering him. It can be a family issue or a financial one. In any case, he needs your support. Guys have a hard time expressing their feelings. Chances are he may want to tell you but don’t know how to.

Do not make a*sumptions. Before confronting him for his distant behavior, ask him about what is going on in his life.

2. It is about your relationship

Another reason for distant behavior may be something worrisome about your relationship. It can be a recent argument, some incident, or whatever. Men often distance themselves from what is bothering them.

Do not be impulsive. Try to talk to him. Do not start nagging. This can make the situation worse.

Sending him tons of messages, calling him all the time, or stepping in his personal space is clingy behavior. Men need their “me” time. Everyone needs love and attention, but over-doing, it can make people run away from you. Your clingy behavior shows that you are needy. This creates a wrong impression on your partner. 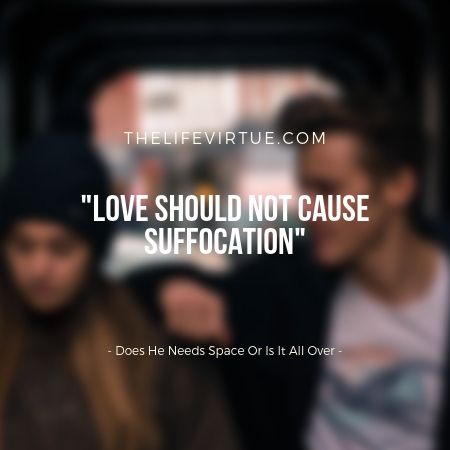 Have some life outside your relationship. Be productive with your time. Love him but give him his space too. Let him miss you. Don’t overwhelm him by your continuous presence.

4. He is feeling jealous

Guys often get jealous when they think that you don’t prioritize them. If you have been spending more time with other people, chances are this is making him insecure. He feels jealous that your time is consumed by other things/people than him/your relationship. This can make him feel neglected. Hence he is acting distant as a reaction. 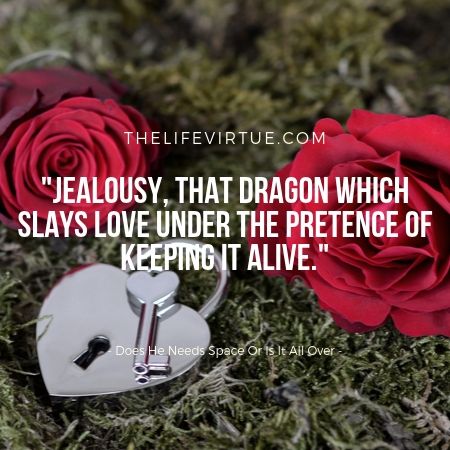 Reassure him about our love. Spend some more time with him. Plan a meeting a talk one-on-one.

A sudden workload can consume a lot of time. This can frustrate you a lot, especially if it is without notice. Chances are he is busy with his work, and he needs time to figure it out.

Let him take his time. Don’t panic. He will get back to you.

6. The relationship is fast-paced for him

Men and women function differently when it comes to relationships. More often, women want to take a relationship to the next level before a man is fully settled within a relationship. If he is acting distant due to this particular reason, it doesn’t mean he doesn’t care. Chances are he doesn’t want to rush anything and needs time to place relationships properly.

Expectations can kill relationships. It’s good to expect certain things from a relationship but be realistic about it. Give yourself some time too. Weigh down everything before making desperate attempts to settle down early in a relationship. 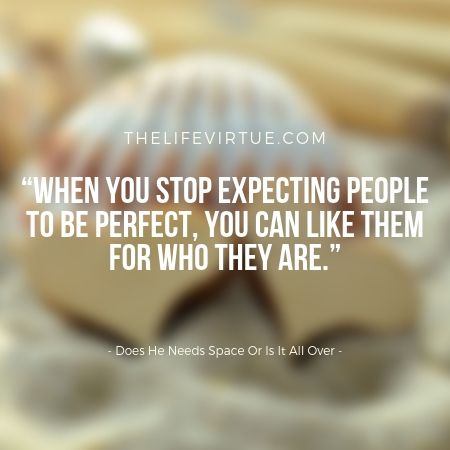 How to Deal with Your Man when He Needs Some Space?

The way you act will define the outcomes for your relationship. Be it any reason, maintaining composure. Here are three useful tips for you for dealing with this situation:

1. Allow him to dump you

Allowing your man to dump you is a counter-intuitive approach. Often, men act distant because they fear confrontation of breaking off. Tell him that this isn’t working out and that he has the opportunity to move on without hesitation. If he doesn’t want to break up, this approach will allow you to communicate your feelings.

You may want to act cool, but this can be mistaken for disinterest. Do not hide your real feelings. Acknowledge and show them when necessary. 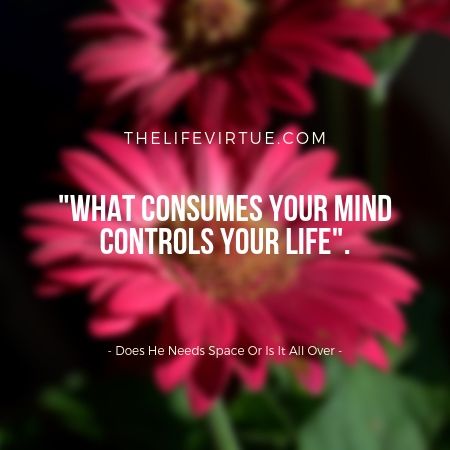 3. Leave him for some days

You might be desperately waiting for his response, but don’t lose your track. Give yourself some time. Give him some space and let things cool down for a while.

FAQs on Does He needs Space or It is All Over:

Does he need space or he is done with me?

When a man says he needs space then there is something serious for sure. It is important for you to show respect and honor to his wish. Otherwise, you might push him away even further.

Why do guys need space?

Will he be back If I give him space?

Giving respect to his wish doesn’t guarantee to bring him back. In a relationship, both partners have an equal right to leave anytime. You should not beg for him instead wait and watch, if he is yours, he will certainly come back.

How long is the space in a relationship?

Space sometimes proves to be healthy in a relationship, if you are having a hard time with your partner then you should give him some space for a week or two to figure out things.