Before discussing the pros and cons of utilitarianism, let’s discuss its brief definition first.

Utilitarianism is a theory of normative ethics introduced by Jeremy Bentham and James Mill. It can be defined as actions being either “right” or “correct”, based on their ability to promote happiness.

Anything that creates an opposite reaction is then considered as “wrong.” This structure signifies that the “means” are often justified by “ends” when we are seeking to acquire a particular reaction. However, there are some pros and cons of utilitarianism. 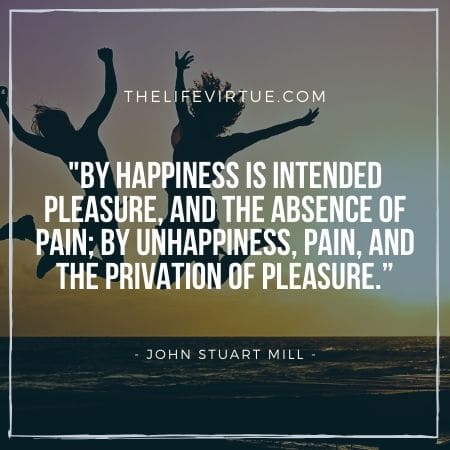 If an action results in happiness more than available alternatives, then it is acceptable for making a choice. Three specific premises of utilitarianism must be reviewed for determination of the correctness of any action which is taken.

These three premises suggest that pursuit of happiness is central to utilitarianism. It deems happiness as something always good for an individual. Any opportunity to increase happiness should be seized because joy is a core human desire.

If each member of a group is happy, then the entirety of the group can be deemed as happy.

This theory emphasizes that by focusing on happiness, we can work towards the collective betterment of society by improving ourselves; individually. Some practical concerns come to the implementation of this theory as a model.

So let us now look at the pros and cons of utilitarianism to explore further.

1. Utilitarianism is a universal concept

The pursuit of happiness is pretty much the goal of everyone, regardless of their culture or nationality. Everyone wants to reduce the risk of harm for themselves.

They don’t want to live a miserable life. Even pessimistic people want to feel happy at one point.

In a society where happiness is prioritized through actions, more common ground could be found. We can take one step closer to a borderless world through the application of this principle. Therefore, being a universal concept is the major pro among the Pros and Cons of Utilitarianism.

2. Pros and Cons of Utilitarianism – Practicing a Religion is not a Condition

Utilitarianism prioritizes happiness over anything else. Spirituality becomes self-directed in such a case. Pursuing the meaning of life becomes easier.

Ethically speaking, this is one of the cons among the Pros and Cons of Utilitarianism.

3. Pros and Cons of Utilitarianism – It follows the Democratic Principle

The fairest way to make nationwide decisions is through a majority vote. It is a means through which differing interests of people could be balanced. The outcome of the majority vote is perceived as “right”.

It dictates the course of action that should be taken.

Lack of consideration of this “right” makes it “wrong.” However, it doesn’t necessitate agreeing with the argument rather the acceptance of it.

4. The Process of Determining Right or Wrong is Objective

The consequences always follow choices. The outcome can vary from positive to negative or a mixture of both. Utilitarianism defines morality through these measurements.

Recognition of results brings happiness. It makes it easier to find an objective way to determine right or wrong at a personal level. 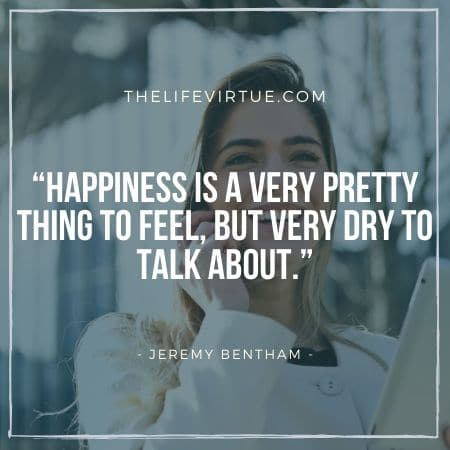 Once we are done doing it at a personal level, we can join others with similar conclusions. The process can change our perception of communities. It can also prevent potential free-for-all subjectivity.

Happiness could be increased if everyone is allowed to do their “own” thing.

5. Pros and Cons of Utilitarianism – It is Effortless to Use

A comparison of positive and negative effects can urge us to make more logical decisions. The vast majority of people rely upon a more straightforward way of finding inclusive happiness.

6. Pros and Cons of Utilitarianism – It Works on Intuition

Utilitarianism is well aligned with our natural intuition. It is about urging not to harm people we care about. It is a standard part of human life that they don’t intentionally physically harm others.

They remain conscious of harm they could inflict. This is because such cases can create damage for themselves too. Evaluation of potential consequences leads to rational choices.

7. It is based upon the Pursuit of Happiness

Happiness is the most common and ultimate goal of people.

Many of our actions reflect the desire to achieve happiness. Joy has an intrinsic value. Pursuing activities that make us happier makes our life and society better. This is among the Pros and Cons of Utilitarianism because it allows us to look at everything related to the ultimate goal of life.

1. Happiness is not always a primary focus

Utilitarianism emphasizes that only happiness has intrinsic value. Freedom of choice is what makes life worth living. According to this principle, any other “good” apart from happiness have secondary importance.

For example, if you love someone, but they make you unhappy at times, then the moral outcome of it should be fixing the situation immediately. This can mean separation. Such an example signifies that anything other than happiness has secondary value to it.

This kind of approach is not very practical & thus included in the Pros and Cons of Utilitarianism.

2. Ends do not justify means

According to utilitarianism, the good of the majority always outweighs the right of a few people. This can mean anything, for example, killing a few healthy individuals and donating their organs to those who need a transplant as a “greater good.” Situations cannot always be extreme, but somehow this is still a flaw.

3. Consequences can be Unpredictable

Utilitarianism is based upon assumptions. It is about making future assumptions to predict a higher level of happiness for Today.

Implementing this theory is not feasible because the future is never guaranteed. This is one of the major con among the Pros and Cons of Utilitarianism.

4. Pros and Cons of Utilitarianism – Subjectivity of happiness

Repetition reduces happiness. This means that the same thing that brought you happiness with your first encounter can cease to bring happiness over time. 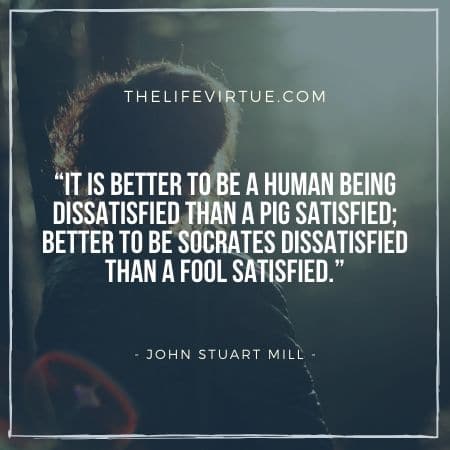 There is no guarantee of forever happiness from the same thing over time. Among the Pros and Cons of Utilitarianism, the outcomes of utilitarianism are immeasurable and unpredictable over time.

5. It makes you dependent on moral code

Abandoning rules, regulations, and laws to pursue happiness will make you dependent upon others. It will make you rely on the choice of others not to harm you.

Although many people believe that humans are inherently good, but in reality, people are capable of defying moral code if it suits them.

For example, in a survey, 70% of men admitted that they would cheat if getting away with it is guaranteed. This shows that utilitarianism can ensure the happiness of some people, but it can inflict harm in its wake.

6. It doesn’t focus on the act

The biggest flaw of utilitarianism is that it focuses on the outcome rather than the action itself. There is a lack of moral judgment on the actions of people. It only implies consequences if happiness isn’t the outcome.

According to research published in Psychology Today, 75% of people disagreed that they ever raped someone. However, with a little twist in question, a significant number agreed they ever coerced someone to have sex.

This example signifies how life would be under utilitarianism. If maximum happiness is ensured, then the morality of the action doesn’t count much.

There is no tangible way of measuring happiness. Our emotional reactions vary from situation to situation.

Utilitarianism offers a valid proposition, but it doesn’t provide an accurate idea of measuring satisfaction in current systems.

There are no particular criteria for such a measurement, even if scientific tools are employed. The experimental tool may be based upon the principles of the creator, which wouldn’t be applicable for all.

8. The majority would dictate outcomes

Under the system of utilitarianism, the majority would dominate the process of decision-making and its consequences. The majority can easily exert their influence to control the minority.

This control may not always be ethical. Utilitarianism will pave the way for the tyranny of the majority.

For example, if the majority considers sexual violence such as pedophilia acceptable, then it would be justified in law. Utilitarianism would undermine morality, which is one of its most significant flaws.

FAQ – Frequently  Asked Questions on Pros and Cons of Utilitarianism

What are the advantages of utilitarianism?

It’s very open. It is not well explained by X as a good thing and Y as a bad thing. Utilitarians have the freedom to change the rules and explained the worst action for a good outcome.

What are some disadvantages to utilitarianism?

Satisfaction isn’t constantly an essential core interest. Closures don’t legitimize implies. Results can be flighty. Upsides and downsides of Utilitarianism.The subjectivity of bliss. It makes you subject to moral code. It doesn’t concentrate on the demonstration

What is a key weakness of utilitarianism?

Now and then what is most good won’t produce most delight. Improvement by Mill and Rule: now and again it is adequate to break the guideline or the principles on the off chance that they don’t create the best result. A shortcoming of Utilitarianism: individuals are intrinsically narrow-minded.

What is the importance of utilitarianism?

It is a standout amongst other known and most compelling good speculations. Utilitarians accept that the motivation behind ethical quality is to improve life by expanding the measure of beneficial things, on the planet and diminishing the measure of terrible things.

We have gone through the pros and cons of utilitarianism in this article.

Utilitarianism is a theory of the 19th century. It is based upon the philosophy of consequentialism. As we have discussed the pros and cons of utilitarianism, it is signified that it is not very practical when it comes to its application. Despite its intellectual value, this theory fails to answer some of the fundamental questions about its implications.

Happiness cannot be the sole determinant of human actions. Numerous other factors should be taken into account. Humanity will lose integrity if we inculcate such a lifestyle.

When considering the pros and cons of utilitarianism, the cons outweigh the pros of it.