Isn’t it weird that you two are texting every now and then and then he just randomly disappears, and if you don’t text back it stays like that for a while until he finally texts and pretends like this didn’t happen? Or if you guys have had a quarrel on chat and he would not reply showing his anger but he would be completely normal a couple of days later?

Why Do Guys Stop Texting and Then Start Again

Guys have the nature of trying to be dominant, while they text a girl they may have some feelings for. There can be various reasons why guys would stop texting you for a while; completely vanishing, and come back after a while as if nothing had happened.

Here is a list of things you should have in mind to answer such a question “why does he stop texting for a while and reappear out of the blue?”.

Why Do Guys Stop Texting?

Every guy possesses a different mindset. There are quite many categories that are popular in a generation hence they become a stereotype. Such stereotypes may include:

Usually, it is “hard to get”, where the guy is trying his best for his reverse psychology to work on the girl he likes, typically the girl ends up liking the guy. What we do know is girls die over bad guys, guys who pay less attention and are busy. Keeping this in mind, the guy just tries something that makes him fall in the category of “bad guys”, so she falls for him. 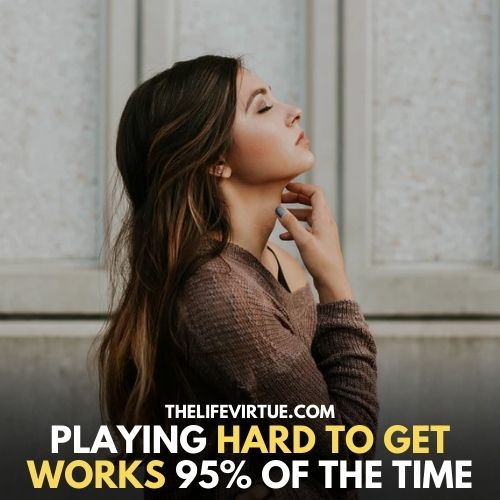 Some guys are attention seekers, they would do such an act to see if the girl is worried or asks what’s wrong. Guys of this mentality are usually exaggerative, they will take a small problem and make it look like a life & death situation. 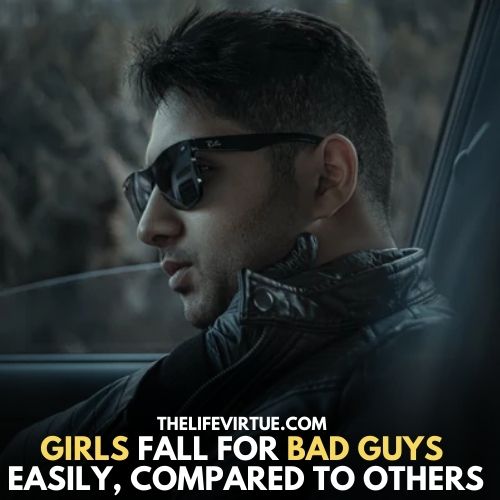 In such a way, the girl gets worried that something is wrong with the guy and ends up spamming his inbox to check if he is all okay, while this will give the guy mental satisfaction due to all this attention he would receive.

This one is a basic high school trait, where the guy would just have no reason to ignore her. He may show his buddies at school like ” check this out bro, I ain’t even replying while she wants me so bad”. Such guys are less interested in the girl but in for the fame. They would feel somewhat “cool” by showing off something totally made up.

He may already be famous with this title, so be careful. But if however, you are unaware, you should take precautions in any case just to avoid playboys. They are there just for temporary relationships, or just wrong intentions. They know they would just use you for something like their sexual desire if they find you attractive, and just stop replying to them.

If they do hit you up after a while, you should understand he is back for the same reason, hence ignore him. The best solution would be as soon as you realize something sketchy is up, whether ask your mates who recognize him or just block him. It’s the best solution.

5. He Wants To Check it is Both Ways

In some cases, the guy is giving his level best to keep it up to the girl he likes. Sometimes love can be very one-sided. Hence he would try something like this to check if the girl misses him back. If he is always the first one to text, he would keep a check whether the girl would even check.

Since he is putting so much effort to make it happen and isn’t receiving the response he expects, he would try this. If you know he likes you and if you like him back, go ahead tell him. Make him happy after all the effort he has given in.

He may have replied and kept the conversation going, doesn’t mean he holds the same feelings as you do. Maybe he just found it rude to leave you hanging and engaged in a conversation. But as he realized you may be in with such intentions that you like him, he may stop texting or reply after a couple of days to slow it down.

Or if simply he has ran out of topics to talk about, he would make up an excuse and just fade from the conversation and just not reply for a while.

Why Do They Start Texting Again

There comes a time where they get bored with others so they remember that there was a girl they just randomly stopped texting (you), so they would come back and state a random excuse just to engage in conversation again. They would then check if you’re up for hangout or anything more than that.

What To Do When He Stops Texting

There are quite many ways to deal with him randomly not texting. Some may be tough, but worth it. Go through all the ways and decide which one fits your situation, and eventually follow it.

If you really care for him and may have a frank relation, give him a call and ask what’s wrong. This way you would also know what is up as well as him being aware that you do care for him. Or in the other case, If you don’t know his texting habits, consider how much time does he spend on his phone. 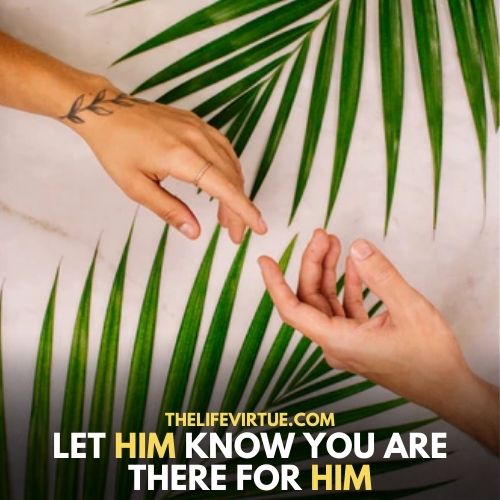 He may be busy or his routine is very scuffed. Through a phone call, things would get clear, you would understand from his tone whether he is pretending or he actually doesn’t see your message.

If you guys are new to each other, giving time would be best. Giving him time would give him the thought you are not annoying nor are you desperate for his replies. He wouldn’t even be stressed if he hasn’t replied to you due to his busy schedule. This makes it a healthy relationship where you don’t bother the other, where there are fewer restrictions and more freedom.

Wait for him to come back and if he’s back after a short while with a justified reason, accept it and don’t be a burden. This way he would like to speak to you since you don’t mind him replying late. Even if it is a lame excuse, don’t make it a big deal. Let it slide through.

If you get the vibe that he is purposefully ignoring you, or he is not much interested in you, walk away! You have your dignity and self-respect, if one is not showing much interest, never text him again. give him the feels that he was the one texting and you ignored him, if he messages you after a couple of days or weeks, ignore him. Don’t fall for him again, remember what he did, don’t slip so easily.

If you are frustrated and done with his behavior, straight-up ask him. Don’t be shy or think how he would feel about it. Ask him why does he randomly stop chatting. Listen to his justification and then decide what to do. Whether to keep it going this way or just cut off permanently. Even though cutting off may not be easy and you may go through a heartbreak, but it is all better for you in the long run.

If to his words it or you feel he has a busy schedule, ask him to make time or just meet him. Whether outdoors or keep visiting him if you really care for him. Maybe help him out in his busy schedule while around.

Do some of his chores or help him out through his working routine. If you really have feelings for him, this would be the best way since you are already understanding his problems and helping him out without him asking.

There are many habits you may take into consideration while speaking to a guy. Don’t get too dishearted or offended when his sudden disappearance occurs. Guys usually have a mind of staying busy, from teenage they would try starting a part-time job or any work that would generate finance. They would want to earn to fulfill their luxurious wishlist. Apart from that guys are quite into hitting the gym to make a ripped body.

One thing you may put in mind, his homies are above you. So if he gives them time more, don’t complain. He trusts his homies more than anything since he has spent a great part of their life together and you came later into his life. Never also blame him for this. Instead, if you remain calm or encouraged him to give time to his boys, he may be impressed by you. The point is you aren’t asking for much time and telling him to give time to his close mates. This will leave a great impression of you on him.

There are many stereotypes but some stand out quite much. The texting style reflects his intentions. This way you would know what you are in for, what are his feelings while he speaks to you. These may include:

One who would make you his therapist and tell you everything wrong with his life. He may end up spilling some of his secrets as well. Well, this means he trusts you very much and you may have a chance to hit on him. Keep consoling him and this way you’d get closer and closer to him, and eventually end up dating. 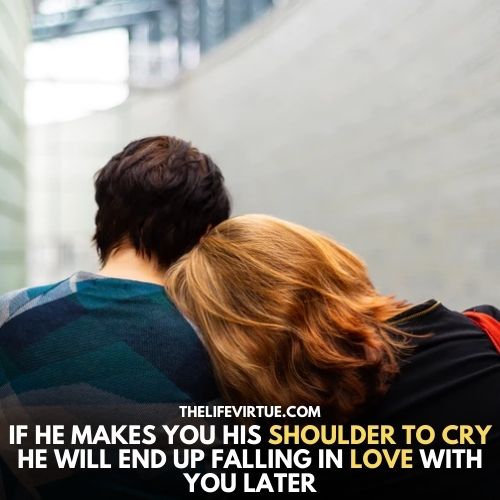 If he keeps complaining all day, he really needs your support and therapy. Keep being nice and sweet, if you manage to cure his depression, he will be forever grateful and probably fall in love with you.

2. He Compliments You A Lot

If from time to time he compliments you or reminds you how beautiful you are, he definitely wants you bad. Observe him for a while and if he is genuinely sweet and continues to compliment you, again and again, he is really obsessed with you. He really wants you. So if you do have feelings for him, don’t stretch it much and try taking it forward before he gives up.

If he’s very interrogative; asks a lot of questions about you. About your habits, your routines, likes and dislikes, interests. He is treating your chat like a tinder inbox meaning he is in for a relationship. Maybe he is attracted to you because of your beauty and he is finding out if you guys would link up. If yes, eventually you guys would form a healthy relationship and both will probably be quite happy.

No matter how attractive the guy seems, no matter how sweet he looks, don’t fall for him easily. Investigate properly, see his intentions over text and understand how much he is into you, or how bad he wants you. Then decide whether you want to take it forward; whether it’s worth taking it forward or it is just a temporary relationship.