Before discussing the types of community, let us first define a community.

A community is a group of people that live at the same place and share some common characteristics. There are many types of communities that we are going to discuss in detail, but first, let us look at the standard features of a community.

Locality and sentiments are the most common element of social cohesion that shapes up a community. 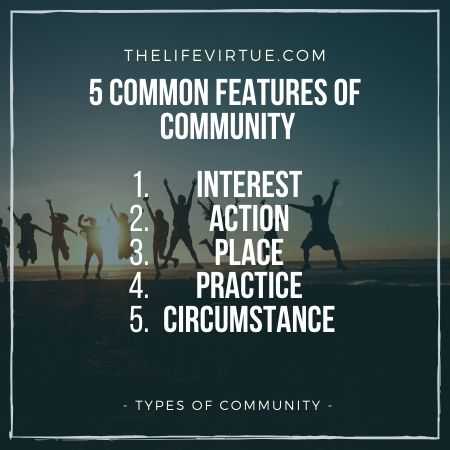 According to sociology, a community is a set of meaningful social connections within a group. The size of the group may vary, but all the members have something in common. Communities are social. It consists of a web of relationships operating within certain boundaries that are shared and agreed among its members either implicitly or explicitly.

Each community is characterized by established traditions and particular patterns of behavior which can be implied or even defined. Some bond is shared among the members such as geographical area, background, experiences, etc.

A community forms a social institution that provides a stable structure of conventions; providing social order and meaning.

5 Common Features of a Community

People with common interests or passions can together form a community. For example, a community of pianists. These communities don’t have much strict code of rules, because they are limited to the breadth & scope of the Interest.

A community can also be made up of people who are acting together to bring a change. For example, a community of feminists. There can be various shades of such types of communities as well. Every culture & philosophy interprets these actions differently.

Co-existence in a geographical area can also be shape up a community. For example, a community of Muslim ex-pats in Poland. This is a hybrid form of both the Interest & Action types of communities. The geographical location serves also in the concept of Nationalism & Nation-states.

Communities can be formed by people who are from the same profession or undertake the same activities. For example, A community of young doctors. These communities are both at national & international level.

Some communities are brought together by external events or situations. For example, a community of refugees.

There are three types of community, according to sociology. Following is a brief description of them:

The rural community can be characterized as a natural phenomenon. Every society has a rural community, no matter how distinct their culture or pattern of social life is. People who have extreme similarities in objectives and ambitions of living, shape up a community that is a product of natural, free will.

Agriculture is a fundamental part of the identity of a rural community. People of rural communities have a higher degree of homogeneity in their character and more face to face interaction with each other. 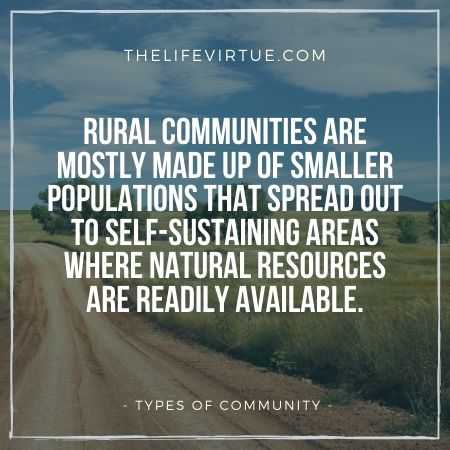 Necessary facilities such as schools, hospitals, police stations, etc. are mostly absent from such a community life. Such communities are often perceived as ‘backward’ due to a lack of proper infrastructure. Typically, inhabitants of a rural community have to travel to the nearest city or town for access to necessary facilities like medical care, etc.

Rural communities are mostly made up of smaller populations that spread out to self-sustaining areas where natural resources are readily available.

Sub-urban areas are often referred to as single-family homes or housing divisions that are closer to each other. 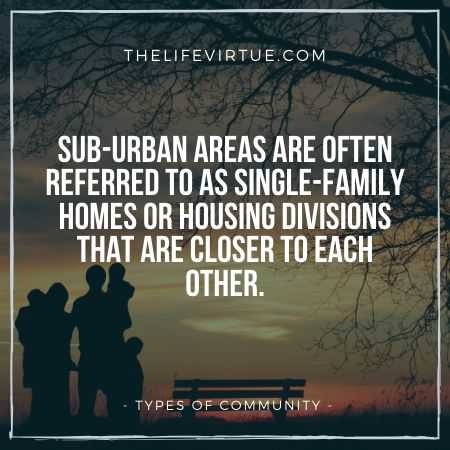 Apartments are uncommon in a suburban community. Suburban areas mostly began to emerge in the 19th and 20th centuries as a result of improved infrastructure such as railroad transport that facilitated commuting. Suburban communities are mostly settled around an abundance of adjacent flat land. In some countries, such suburban areas are referred to as “neighborhood” of cities or a “town.” 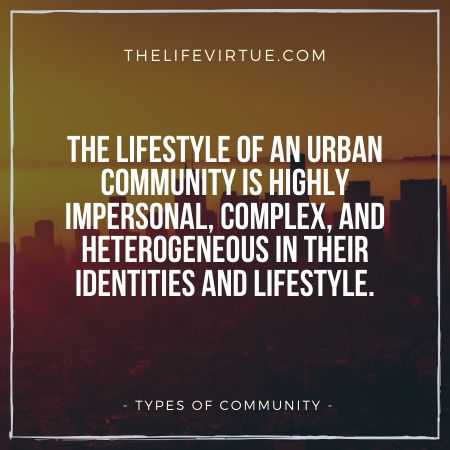 Urban communities are based on a larger population, and most often, urban areas are overcrowded due to it.

As we have discussed, three types of community, primarily. Now let us move forward to the organizational typology of communities that was proposed by Schubert and Borkman in 1991.

These are based on organizational structures. However, this typology is intended to explain self-help groups, but they help in giving broader insight into the type of communities. They help to understand various forms of organizational systems.

Following are the five types of communities according to organizational typology:

It is among the types of community that is based on individuals who are not closely associated with each other. This can also account for subordination in some cases. Such community members are not designated or affiliated with a community or board.

They might only be present at any validly convened meeting where their action is required for a common objective.

Such communities are a*sociated with each other due to a common purpose or cause. They cooperate in a standard and collective environment. It can be seen as a partially individualistic and unified community. 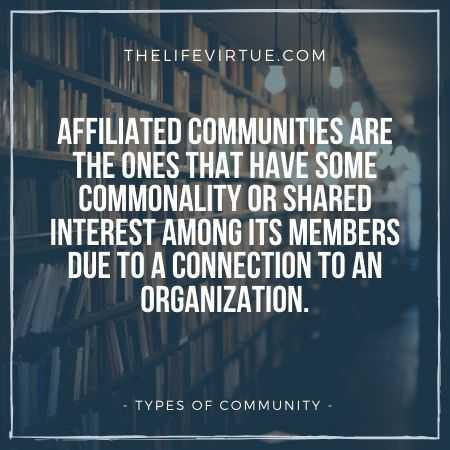 Affiliated communities are the ones that have some commonality or shared interest among its members due to a connection to an organization. For example, an affiliated military community would mean that they spend some portion of their life has a direct link to military lifestyle such as servicing in the military or having a kinship, etc.

It is a type of managed community where some management exists for the coherence of the community.

Ferdinand Tonnies introduced the notion of community in 1897. He used this notion to describe modern life by explaining the transitional nature of society. The social transformation of communities is interlinked with rapid industrialization and urbanization. Religion can be seen as a bonding mechanism of community, primarily.

In a modern world, traditional communities have transformed into “globalized networks,” where clusters of households are linked both locally and globally.

Concept of Community in Modern-day 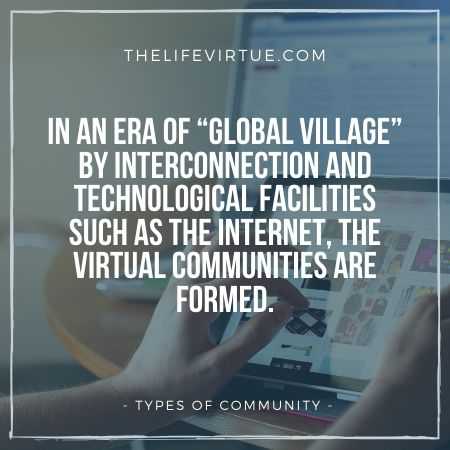 According to Berry Wellman, the modern community can be called as “networked individualism.” It is a type of community where individual members are sparsely linked without any regard to physical space.

They are loosely bounded, and not tied within a single locality. Mostly, their interactions are not visible. This pertains to the emergence of virtual communities. In an era of “global village” by interconnection and technological facilities such as the internet, the virtual communities are formed.

What is the Difference Between Community and Society?

The significant difference between society and community is that society is based upon interactions among varied people. In contrast, the community is built upon the interaction of people that share some commonality.

“Individual” is fundamental to both society and the community. A society is a collection of various communities.

Communities are the building blocks of society. The locality is essential in context to society than a community.

What Are The 3 Types of Community?

There are three types of communities suburban, urban, and rural.

What Are the Two Types of Community?

There are two types of communities Urban and Rural communities, owing to different social circumstances in both the countryside and urban areas.

What Is Community and Its Type?

A community is a group of living things with common characteristics such as norms, customs, religion, values, or identity. Communities can share a common sense of place located in each geographical area like a country, village, town, or neighborhood or in the virtual space through a communications platform.

What Are The 5 Principles of Community Development?

As we have discussed the types of communities, there are three types of primary and five types of organizational communities that share five standard features, as discussed earlier in the article.

The study of community is a fundamental aspect of sociology because it gives us an insight into the micro-level functioning of society. The basic norms and conventions of a community differentiate it from other forms of communities.