Letterkenny Quotes are hilarious, relatable, quirk & funny. But one can only enjoy them if he has watched the Letterkenny Season, if You want to share these Letterkenny quotes with your friends, let them watch it first.

1. There are 5000 people in Letterkenny, these are their problems. 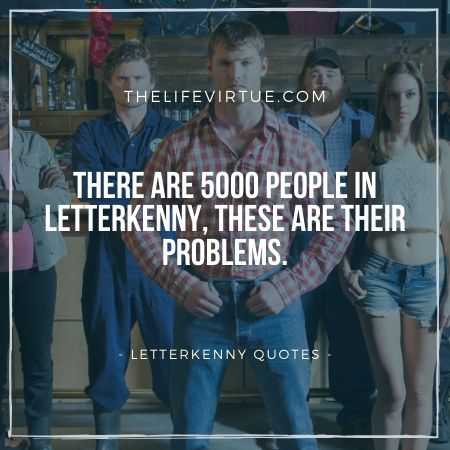 2. Do you guys do CrossFit? You can Crossfuck off!

3. Tim’s McDonalds and the beer store are all closed on Christmas Day, and that’s about your whole world right there.

4. Well, there is nothing better than a good fart. 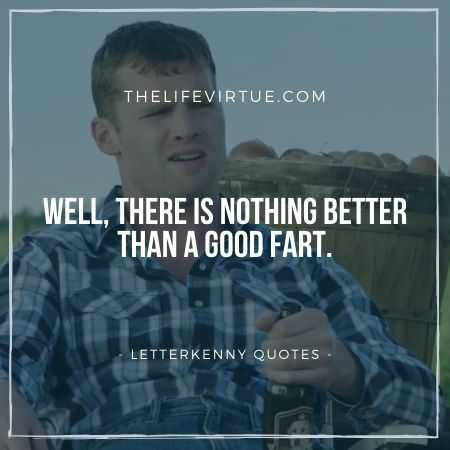 5. What’s up with your fuc*in body hair big shoots? You look like a 12-year-old dutch girl.

6. Your friend says his sled’s got so much torque he can’t keep the front end down, Ok bud, if you wanna blow smoke, go have a dart.

7. You are made of spare parts, aren’t you buddy? 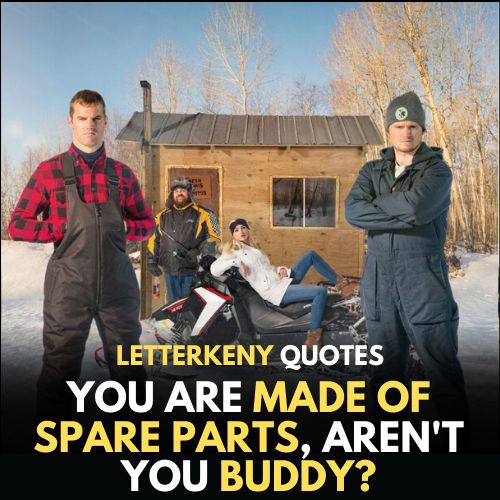 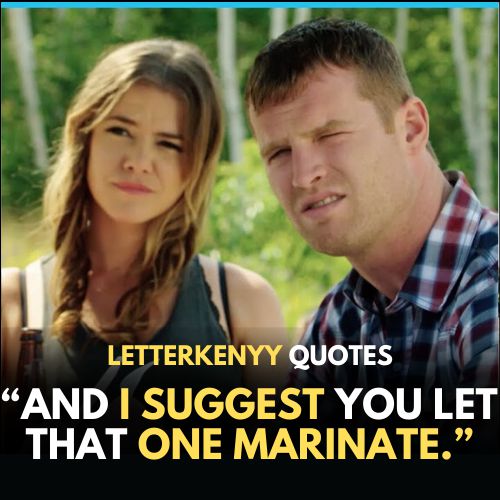 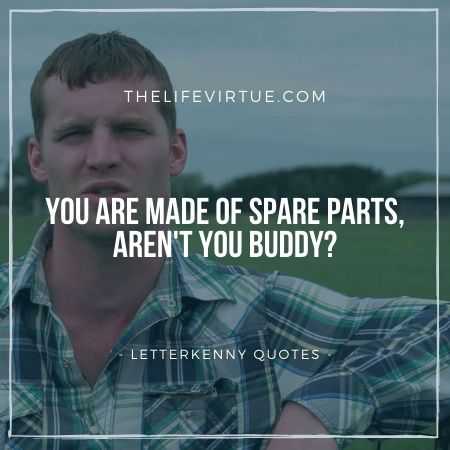 8. You wanna come to a super soft birthday party? 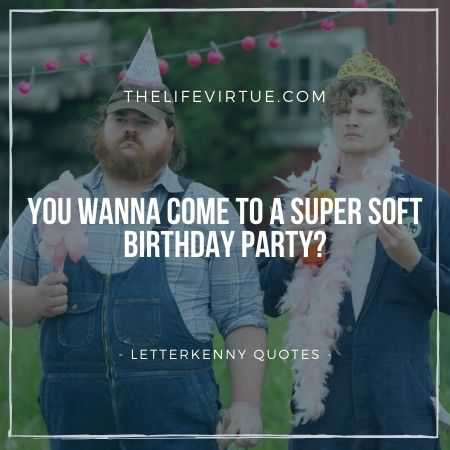 10. Do you know what, I don’t want you to kiss and tell, that’s impolite…. but I am kind of curious.

13. “It’s like algebra…why you gotta put numbers and letters together? Why can’t you just go f*uck yourself?” – Letterkenny Quotes

14. I want to give back to the community by helping people find love. – Letterkenny Quotes 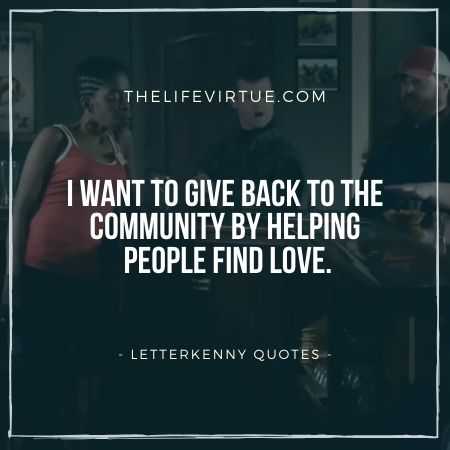 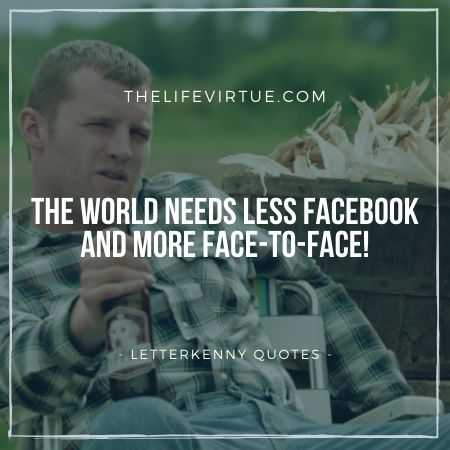 17. Look if you are coming, you better come correct.

18. I need to give you one more chance to retract, no questions asked. Before this conversation becomes a confrontation.

19. When you are bringing complaints to someone, they’ll be more receptive to alter into their behavior if you make it your problem, rather then placing the blames on them.

20. Every woman knows that the way to a man’s heart is not through his zipper, it’s through his stomach. 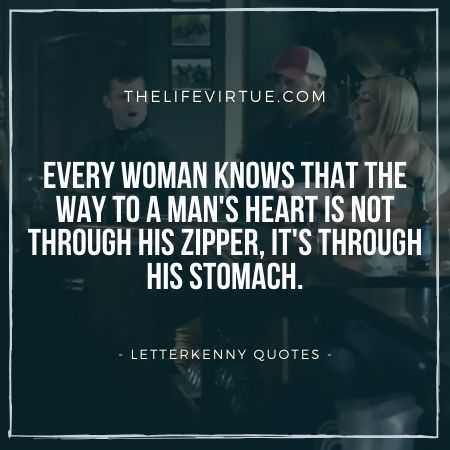 21. “Oh I’m stomping the brakes, put that idea right through the f*ucking windshield.”

22. “You naturally care for companionship, but I guess there are a lot worse things than playing a little one-man couch hockey in the dark.” – Letterkenny Quotes

23. “f*uck Lemony Snicket, what a serious of unfortunate events you f*uckin been through you ugly f*uck.” – Letterkenny Quotes 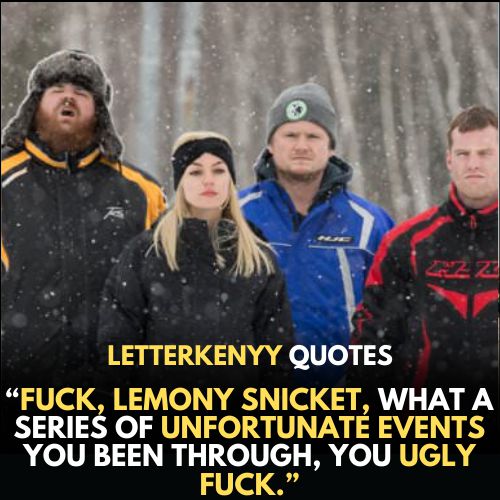 24. “Well, there’s nothing better than a fart. Except kids falling off bikes, maybe. f*uck, I could watch kids fall off bikes all day, I don’t give a sh*t about your kids.”

2. “Tim’s, McDonald’s, and the beer store are all closed on Christmas Day. And that’s your whole world right there.” — Wayne 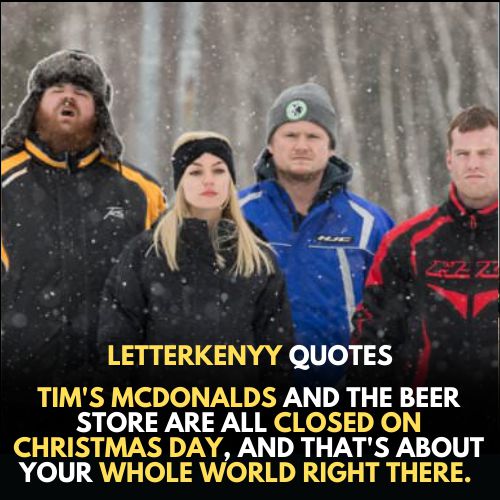 3. “You wish there was a pied piper for possums. But there isn’t, so you’re just gonna have to keep picking ‘em off with a .22.” — Wayne Letterkenny Quotes

4. “You knew your pal had come into money when he started throwing out perfectly good pistachios like he was above cracking ‘em open with a box cutter like the rest of us.” — Daryl Letterkenny Quotes

7. “Seeing as this is most certainly a one-off event and not a tradition that also falls on some made-up holiday that I couldn’t give a cats queef about, I’m out. There’s happiness calling my name from the bottom of a bottle of Puppers.” — Wayne

10. “You’d best be preparin’ for a Donny Brook if you think I’m going to that super soft birthday party of yours.” — Wayne

31. “Buddy you couldn’t wheel a f*ckin’ tire down a hill.” — Wayne Letterkenny Quotes 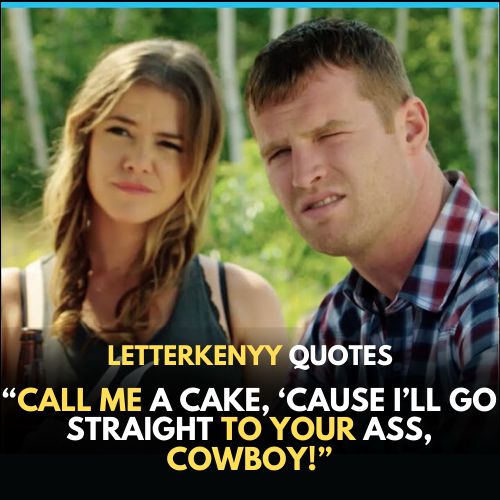 34. “I see the muscle shirt came today. Muscles coming tomorrow? Did ya get a tracking number? Oh I hope he got a tracking number. That package is going to be smaller than the one you’re sportin’ now.” — Daryl

35. “Closest you’re gettin’ to any action this weekend is givin’ the dairy cow’s te*ts a good scrubbin’.” — Wayne

38. “F*ck you Shoresy! Put a shirt on.” — Reilly Letterkenny Quotes

42. “You stopped toe curlin’ in the hot tub ‘cause you heard sperms stay alive in there and you’ve seen Teenage Mutant Ninja Turtles enough times to know how that story ends.” — Wayne

43. “F*ck you Jonesy! Your mom just liked my Instagram post from 2 years ago in Puerto Vallarta. Tell her I’ll put my swim trunks on for her any time she likes.” — Reilly

44. “F*ck, Lemony Snicket, what A Series of Unfortunate Events you been through, you ugly f*ck.” — Jonesy

46. “F*ck you, Reilly, go scoop it off your mom’s floor! She gives my nipples butterfly kisses.” — Jonesy

47. “F*ck you, Jonesy, your life is so pathetic I get a charity tax break just by hanging around you!” — Shoresy

48. “You ever hoover schneef off a sleeping cow’s spine?” “I’ve hoovered schneef off an awake cow’s t*et.” — Daryl

49. “It’s like algebra…why you gotta put numbers and letters together? Why can’t you just go f*ck yourself?” — Wayne

50. “You naturally care for a companionship, but I guess there’s a lot worse things than playing a little one-man couch hockey in the dark.” — Wayne

24. “We only got one shot at this. One chance. One win. You know? Vomit on your mom’s spaghetti, or whatever that talking singer says.” — Coach

26. “Here’s a poem. Starlight, star bright, why the f*ck you got earrings on? Bet your lobes ain’t the only thing that got a hole punched in ’em.” — Wayne Letterkenny Quotes

27. “It’s a hard life picking stones and pulin’ teats, but as sure as God’s got sandals, it beats fightin’ dudes with treasure trails.” — Wayne Letterkenny Quotes

30. “You’re pretty good at wrestlin’ there, Katy, and that’s what I appreciates about you.” — Squirrelly Dan

What Do They Say On Letterkenny?

Did Letterkenny Get Cancelled?

Letterkenny released its eighth season on 25th December, and the US is also getting the new season on 25 March 2020. But it does not end of the story, as everybody is asking for what is happening more in the future for Letterkenny.

Will There Be A Season 9 Of Letterkenny?

With seasons 6 and 7 having only six episodes each and season 8 having 7 episodes, there are 21 episodes still on the air. If all goes according to plan, season 9 of Letterkenny should release sometime in June 2020.

Who Is Bonnie Mcmurray?

Bonnie McMurray is McMurray’s sister, who hides a crush on Wayne.

It consists of several episodes that discuses the specific problems and scenes of the town people. It is most popular among Canada.